You are here: Home / Endurance / Nourishing Nutrition
There’s always trends that ebb and flow specifically speaking supplementing versus eating real.   I’ve seen it trend towards the former being preferred and honestly see the trend swinging back around in sorts to the latter.  I think both have a place in the sports & general health situation.  That is if you take the time to reflect and understand the “why” behind your choice.  For example, “I’m going to mix a shake with added supplements because otherwise I won’t get these nutrients by not eating or giving in later for fast food” versus “I’m making the choice to make a meal after my training session versus shake up a recovery powder and charge on.” 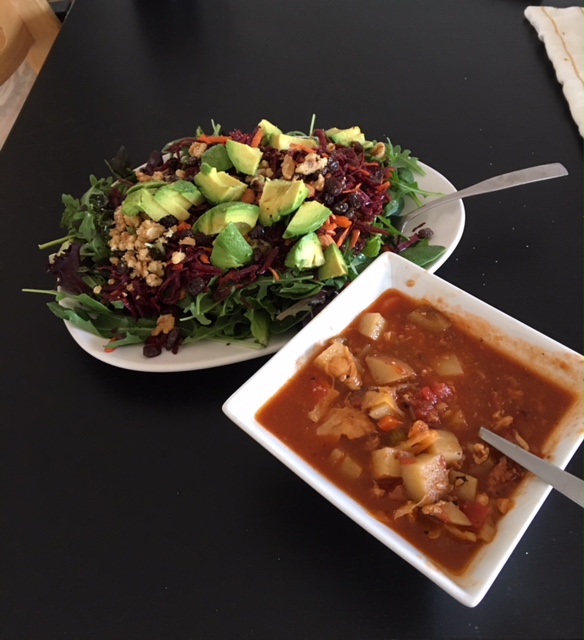 Is this your common recovery meal?

This weekend I saw this as an example within moments in a text thread with an athlete I coach.  Before I departed on my  own ride, I’d responded to a text thread from an athlete reporting a vigorous 3 hr road ride where they’d hit lots of peak powers and expended some serious energy.  With a race coming next weekend, I was happy to see that performance and recommended.  “Great tune up. Recover well!”  I came home after a 3 hour depleting ride with some good quality supra threshold intervals.  I was hungry but not hangry!  I proceeded to make a BAS (aka “Big A$$ Salad) and warmed up some homemade stew.  During which I saw the athlete’s response that came in while I was out riding: a picture from a juice bar.  (And I’ll preface, there’s probably nothing wrong with either scenario.)  My response was a picture of my lunch, to which he said “That looks solid!”
It got me thinking how many times in my past I’ve personally erred towards an engineered bar or powdered mix because I believed it to be superior. In this case, he was probably consuming nutritious food, but think about the amount of isolated or engineered foods you’ve personally or seen other’s resort to in your time.  It’s multi-billion dollar industry.
We may have had very similar nutrient profiles to be honest, but the point is where your choices align with goal and situation.  Luckily juice bars are becoming more health conscious sourcing organic and non-GMO, so this athlete’s choice probably wasn’t bad.  He may have been tight to get home and be with kid and wife, where I had the chance to prep my food while my daughter and wife were visiting the neighbor for a few extra minutes.  I seized the opportunity and opted for a step above someone preparing and processing my food.  If I’d been cramped by not having those few minutes or had been on-site at an event, maybe I’d grabbed an engineered recovery shake over nothing. 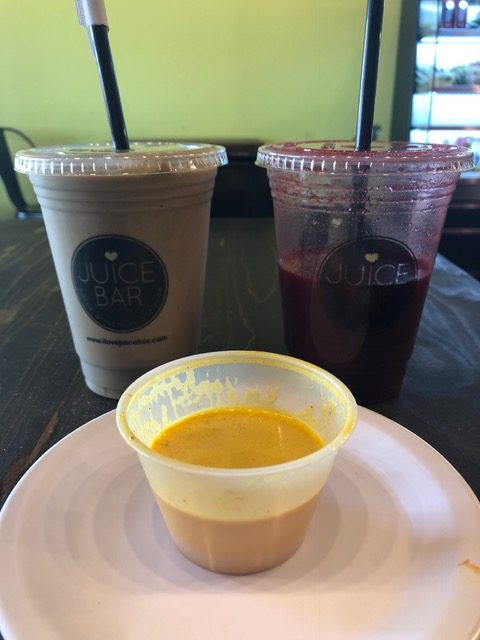 Looks yummy but I want to gnaw on something!

You can argue either way, but I’ve been choosing & recommending the real-food option more and more as time goes for reasons that I believe can’t even be quantified well just by comparing the nutrient reports or “macros”.  Let’s dig right into those reasons.
Satiation
There is something to be said for actually chewing and filling the individual parts of your digestive system.  When you eat real food, you must bite, masticate, swallow and then let the nutrients be broken down to usable constituents by the various enzymes and processes within the system.  Heck this process even starts in your mouth with certain carbohydrates being absorbed in mouth lining.  Hence the studies that show simply rinsing your mouth with a carbohydrate solution can improve performance!  Yep not even swallowing the drink gets you the gains!  So the process of chewing and swallowing triggers psychological fullness and satiation.
Nutrient Synergy
I’m not sure if this is an official term but I define it as the ability of your body to utilize and assimilate the nutrients contained within a given food when in more original form and less processed or even when certain whole foods are eaten together.   Sure there are certain foods you can’t eat all of, but generally speaking an example is eating a whey protein isolate versus a grass fed steak.  Each contains proteins, but the latter has fats and other nutrients in a minimally processed state.  Or like supplementing vitamin C versus eating an onion or orange.  There are other nutrients, enzymes, etc. involved that have probably yet to be studied that aid benefit as a whole versus in isolation.  Like the saying going, “nature knows us best!”
Nourishment
Finally this last point relates to the process of being present with your food and the process.   When you put in the work to prepare your food with patience and care, you have a deeper respect for what you consume.  It transitions from simply being  just “Fuel” into nourishment for your body.  It’s deeper than scooping some powder into a shaker bottle or even running through a line at a juice bar for that matter.  You smell and touch each food source at each step in the process.  Those who have gardens or homesteads take it a step further from the source up.
So my message is to nourish your body when you can with real food and embrace the process.  Sure you can’t all the time (although it could be argued that you could), but you have the choice more often than not.  And that’s what it is, a choice.  So just be honest with yourself whether your constantly fueling verses fully nourishing your body.
And remember there are situational matters to take into consideration like if you’re needing (notice I don’t say wanting) something quick and easy, if you have hard training approaching, racing the next day, resting the next day, won’t get nutrients later, want low residue, etc. but I’ll cover than more in depth. 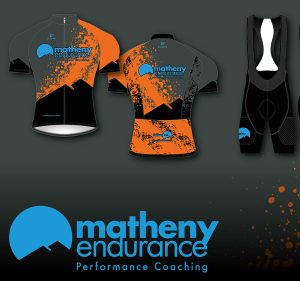