You are here: Home / Endurance / An Unexpected Upgrade

That’s what most relate to getting results. To a certain extent, you must have bits and pieces of these components. We all know that lying on the couch being a sloth isn’t going to get you results.

But it’s like a bell-shaped curve that occurs with many highly motivated people I work with. They tend to blow by that optimal point of work, training, and life and end up going over the deep end.

Basically, all the moving components of performance (in sport and in life) are interrelated and affect one another. Sleep goes down and effects training and intensity. Nutrition goes south because you pushed with too little sleep & body is attempting to make up for fatigue with calories. You see where I’m going.

The hard part with them all being dependent on one another is; where to start?

Since I’ve been through the process with hindsight being 20/20, I encourage you to upgrade your sleep lifestyle.  Most of us have tapped out the simple actionable steps like avoiding electronics before bed, removing any artificial light, sleeping in a cool 65-68deg room, possibly trading out a jolting alarm with a gentle sunlight simulating one.  And if not jump on those easy steps while taking my suggestion on upgrading your mattress.  You won’t regret it!

Better mattress; a simple way to improve performance and quality of daily living?

Think about it; we spend roughly 1/3 of our ENTIRE life sleeping! For those type-A people, just reading that may create anxiety. I’m partially in that boat, as I like to maximize each moment and often get the stink eye from my wife when I’m constantly trying to schedule something.

“What? You mean you wanted me to sleep in with you this weekend? I thought it meant I could score a dawn patrol ride and be back in time for pancake breakfast with the family!” Does that sound familiar?

The new mattress was supposed to be a Christmas gift between my wife and me, but I didn’t submit the order until March. Shame shame!

Why?  Because I was researching materials, toxins, treatments, EMFs (electromagnetic frequencies), brands, sourcing, and company missions. We even drove over 150 miles multiple times to check out specific mattress stores to just lay on several brands.

It may seem great to snuggle into a pillow top mattress for a nights sleep, but most companies aren’t required by law to disclose all the treatments they use so the mattress will withstand an open flame for over a minute! Many of which treatments are banned in Canada, Europe and parts of the US. These disclosed and often undisclosed treatments are known to be absorbed through skin and breathing exposure associated with hormones, brain, and reproductive damage.

Does Formaldehyde, VOC (volatile organic compounds), Decabromodiphenyl Oxide and other Brominated Flame Retardants sound like things you like to snuggle up with?  Good because that’s just the first drawback of most mattresses.

Next are EMFs exaggerated by the coil springs contained within for support. Sounds coo-coo?  I thought so too, but the more I researched; it made sense.

Think about how many invisible signals are bouncing around us each instant especially if we live in an urban area. The coil springs act like an antenna and sleeping within this field of EMFs consumes you while your sleeping.  If you still think it’s a hoax, then it’s like the religious analogy of whether to believe or not; “what’s the downside?” stance. I can’t see one here since I’ll spend 1/3 of my life on it. If I limit my body being constantly fried on low-wave frequencies, then I consider that a success.

Trust me; I tend to overanalyze to the point of inactivity (hence how long it actually took me to pull the trigger on our new mattress), but I just had to eventually pull the trigger (with a little help…uh hum pushing, from my wife).

So in the end, we decided on Savvy Rest Serenity. The brand and this model had all the qualities that we desired. The organic wool, natural Dunlop Latex (or Talalay if you like suppleness), multiple organic certifications and no springs met our initial qualifications, but the extra perks that allowed customization is what really solidified the confidence in our purchase. The split mattress set-up, self-rearrangement of the 3 individual layers of latex even after initial set-up, and a layer exchange program if we didn’t select wisely in 1st place. 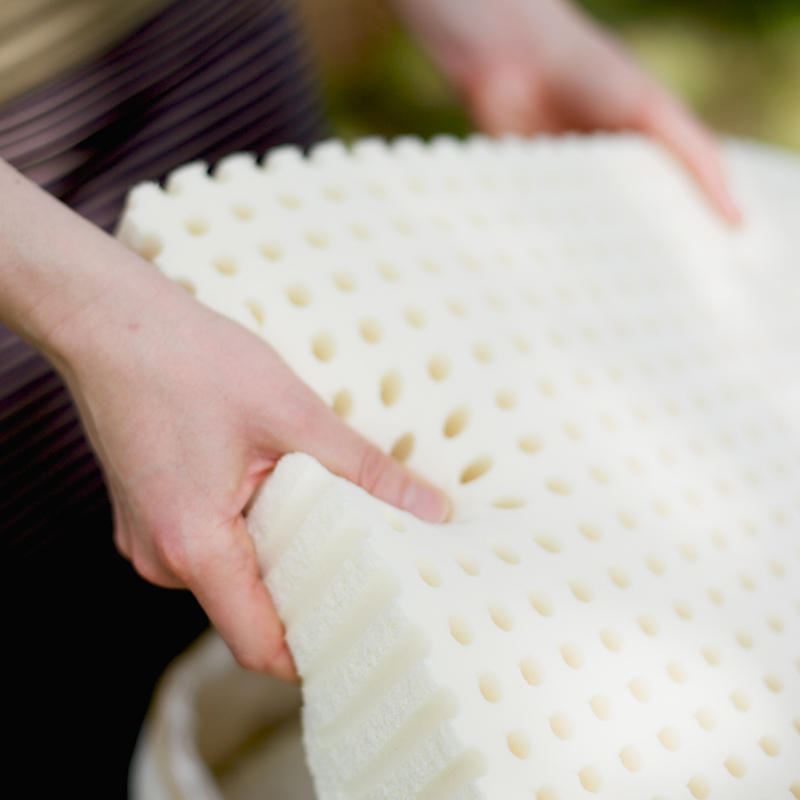 Layer of natural latex in a Serenity mattress.

Luckily it was so comfortable we didn’t have to do the latter, but I like insurance policies on big ticket items, so this was great for peace of mind.

I’ll be the first to admit, it was pricey and many will balk at the sticker price and run away. Even though I almost did, I beg you not to. Honestly, we had to save and budget to seal the deal. I even sold a bike to help get there!

Gasp! Blasphemy you say!  Yeah, I know the N+1 rule, but if better sleep was going to help me enjoy the “N” I was able to ride then I was game to try. And the often unprinted part of the Velominati rule #12 is the S-1 part where S is the number of bikes that would result in a separation from spouse! Photo credit Hizoku cycles if you want a print

I won’t say that it wasn’t painful spending the equivalent of a new whip or upgrade on a bed, but I’d definitely spend more time on the bed than I would a bike honestly. Would it offer as much shits and giggles as a new bike? Probably not, but I’d have to just have to watch with envy as others with their fancy new extra cogs spinning effortlessly while I mashed up climbs!

Trust me, this was a pretty big spend on our part with having a toddler, living in a tiny <800 sq ft home while saving for a possible move, running our own dual respective businesses (where a coaching salary isn’t always the most glamorous when paychecks are cut) all while trying to maintain racing at the elite level. But I wouldn’t think twice having slept on it now for an extended period.

And I’ll warn you that you’re going to be a mattress snob after you get one of these! Traveling won’t be the same whether it’s hoteling it, staying in the Air BnBs or even with family. We were happy to be home to our own bed many times after trips. And this is coming from someone that has traveled in the bike racing era of endless couch surfing and camping on a 3/4” pad in the dirt at mtb races!

Maybe it’s placebo, but I was able to win a national championship just months after upgrading on subpar training according to those that were Strava stalking me!

So even if you don’t choose the exact one I did, there are other options, but I suggest you get on it and upgrade your sleep with a new mattress and reap the benefits!